Nowadays, there are serious concerns that many people are suffering from lifestyle-related diseases such as diabetes.  In Japan, the number of diabetic patients in 2007 was 8.9 million, and it is said that if potential patient numbers were included, the overall total would soar to around 2,210 million cases.  Within the last 40 years, this number has increased by 50%, which means that the number of patients has increased by more than 10 percent per year.  Diabetes now affects more than 450 million people worldwide.

Diabetes causes various complications such as myocardial infarction, cerebral infarction, renal dysfunction, retinopathy, among others.  Recently the relationships between diabetes and atopic eczema and gastric cancer have also been reported.  The cost for healthcare associated with these conditions has become immense, and under these circumstances, there is a growing need for low-calorie, low-carbohydrate foods.  Once a person becomes a diabetic, he or she eats staple foods such as rice or noodles, or sweets or fruits, his or her blood sugar level will rise.  This means that diabetic patients are sometimes dissatisfied with the types of foods they are allowed to eat, which has created a need for the development of a new low-carbohydrate food for diabetics which is both delicious and satisfying while being low in calories and sugars.

For centuries in Japan, Konnyaku has been widely recognised as a low-carbohydrate, low-calorie ingredient, which has been eaten for over 1,500 years.  We have improved the texture of traditional Konnyaku and have developed a new type of patent-protected Konnyaku which can be eaten with confidence by diabetics and potential diabetics as a substitute for such staple food items as rice, noodles and bread.

ABS Dry Konnyaku is an ideal substitute for rice or noodles. Restrict the amount of carbohydrate (low-carbohydrate) is a key to control diabetes rather than cutting down calories. Therefore, ABS Dry Konnyaku can be used for carbohydrate restriction for diabetic patients and people who would like to reduce the risk of becoming diabetic. 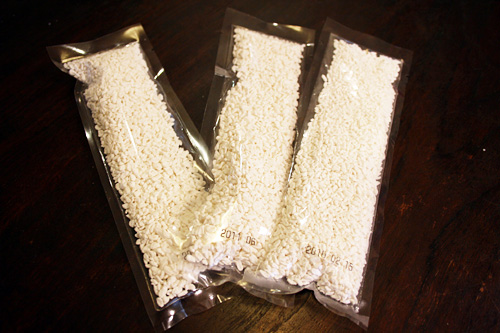 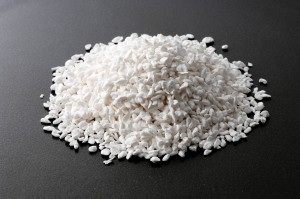 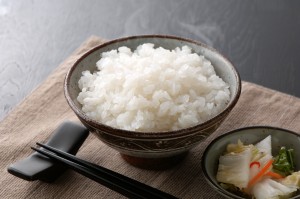 1.  ABS Dry Konnyaku is an alternative for a low-calorie, low-carbohydrate staple diet

We have improved the texture of traditional Konnyaku and have developed products which can be eaten as part of a staple diet (for example rice and noodles).  ABS Dry Konnyaku contains 181.1kcal/100g calories and 28.4g/100g carbohydrates.  Since it absorbs water which causes it to expand to four times its size, when it is cooked, (for example as cooked rice), it contains only 45.3kcal/100g calories and 7.1g/100g in carbohydrates.

2.  ABS Dry Konnyaku is rich in dietary fibre and is gluten-free:

The amount of the dietary fibre in ABS Konnyaku (calculated value)

Indigestible dextrin is a dietary fibre which is approved as a food for specified health use (FOSHU) and various advantages have been reported such as:  its superlative healthful effects upon the intestines, the acceleratory effect on mineral absorption, inhibitive effects on post-prandial blood sugar levels, and neutral fat level, a lowering effect upon serum lipids, and a reduction of visceral fat, etc.

3. ABS Dry Konnyaku can be shaped in various forms such as grain, flour, rice, noodles, etc.

ABS Dry Konnyaku has been developed as a possible alternative to some staple foods.  When shaped like rice, it becomes pseudo-rice or when shaped like noodles, it becomes pseudo-noodles.  By pulverizing it into powder which can even be used for a substitution for flour, it can be applied in various foods such as bread, jam, confectionery and so on.

4. ABS Dry Konnyaku can be reconstituted by hot water

ABS Dry Konnyaku becomes four times its size when immersed in hot water.  For example, if you would like to eat 150g of ABS Dry Konnyaku rice, you would reconstitute it by pouring hot or boiling water over 37.5g of rice-shaped ABS Dry Konnyaku.  In addition, as it is dry, it is easily stored or carried.  In the past, if you were to cook with Konnyaku pseudo-rice in a normal rice cooker, everyone in the family would have to eat it.  With ABS Dry Konnyaku, you can easily reconstitute as much as you need whenever necessary.

5.  ABS Dry Konnyaku has a wide range of processing features